‘Instead of a naïve scientist entering the environment in search of the truth, we find the rather unflattering picture of a charlatan trying to make the data come out in a manner most advantageous to his or her already-held theories’

Over the last two decades, research on positive illusions, self-deception and self-enhancement has demonstrated that human thoughts are positively biased and that this bias is traditionally associated with subjective well-being and mental health (Taylor & Brown 1998; Petersen 2000, Taylor & Lerner 2003). Most people do not hold accurate perceptions of themselves and the world around them; rather they see themselves, the world and the future in a more positive light than is realistically possible.

Research on this subject comes from different fields of psychology in different terminologies (e.g. optimistic bias, illusion of control, perception of control, unrealistic optimism, etc). For the purpose of this paper the terms positive illusions and self-enhancement will be used.

The following definitions are used for positive illusion:

‘a perception that represents what is perceived in a way different from the way it is in reality. An illusion is a false mental image or conception which may be a misinterpretation of a real appearance or may be something imagined. It may be pleasing, harmless or even useful.’(Stein, 1982, p662).

‘Self-enhancement is a concept from the field of social psychology that is commonly used to describe the predisposition that individuals have “to distort self-appraisals so as to maintain the most favorable self-view”. Mikulincer, Mario; Shaver, Philip R. (2005),

Taylor & Brown (1994) argue that these illusions are considered to be mild because an individual’s social environment only allows and tolerates modest illusions. Extreme levels of positive illusions can be seen as maladaptive and are indicate of egocentric self-enhancement and narcissism.

Maladaptive consequences were also found by John & Robins (1994). It could be argued that if positive illusions are adaptive, rather than maladaptive and if self-enhancement contributes positively to well being and mental health it is necessary for the field of applied positive psychology to further investigate and establish how these functions contribute to a better understanding of well-being and mental health in order to make normal life more fulfilling.

Therefore the present review will address the questions ‘How well-founded is the argument that ‘positive illusions’ foster mental health, and what does this mean for the field of positive psychology?

There was a prevailing doctrine throughout the early history of cognitive psychology based on the belief that in order to be a mentally healthy person an accurate perception of reality is a critical component (Allport, 1943; Maslow, 1950; Jahoda, 1958) An extensive review by Jourard & Landsman (1980) states:

‘The ability to perceive reality as it ‘really’ is’ is fundamental to effective functioning. It is considered one of the two preconditions to the development of the healthy personality. (pp75)’.

Optimism was perceived as a psychological deficit, immaturity or weakness of character, whilst a well-balanced realistic view of the future was seen as a strength; a sign of mental health (Peterson, 2000a).

Major impacts on this prevailing doctrine were the contradictory findings on unrealistically perceived illusions by Ellen Langer (1975). The positive illusion of control is a tendency to believe that processes which are proven not be influenced in a realistic way are perceived as controlled. Langer showed that people often perceive positive outcomes through chance as positively manipulated.

In a series of experiments Langer (1975) observed that her subjects behaved as if they controlled a random event when the tasks involve skill cues, i.e. the believed they could influence the outcome via choice, competition, learning by repetition etc. For example, players in a game of dice tend to throw harder if they want to achieve higher numbers, and softer if they want to achieve lower numbers.

The studies showed that subjects were convinced that they can influence the numbers by their way of throwing. Participants who were lucky enough to have a series of good numbers actually believed after a short while that they were influencing the game and have to concentrate in order to keep their game influenced by their skills.

Further evidence for these findings came a few years later from an extensive research by Matling and Stang (1978). Their Pollyanna Principle established that most people recall positive experiences earlier than negative experiences, people recall more positive words whilst speaking or writing and evaluated themselves more positively compared with others. The only remarkable exception to the above findings was found in people with clinical anxiety disorder or clinical depression- they viewed themselves in more realistic or even in pessimistic ways.

Albert Bandura (1989) also supports this position with his view that optimistic self-assessments of what is possible can bring benefits, while truthful assessments can contribute to self-limitations. However, Bandura (1989), fundamentally concerned with the usefulness of optimistic assumptions about control and performance in situations that are controllable, not illusionary, also suggested that in situations where illusions can produce costly or injurious consequences, a realistic view is necessary for human survival and well being.

Taylor and Brown (1988) in their challenging paper posited that these unrealistically positive self-evaluations, an exaggerated perception of control and unrealistic optimism are useful for cognitive, affective and social functions and are therefore necessary for subjective well-being and mental health.

The historically prominent position that mentally healthy people maintain close contact with reality is then at least somewhat false. Petersen (2000) argues that positive illusions are fostered by a warm parenting style and that these illusions are continuously present throughout life, although they are gradually diminishing.

Empirical evidence for these interpretations is documented by studies on perceived quality of driving. (Svenson, 1981). Participants usually evaluated their driving as better than the average person and it is logically impossible for everyone to be better than others, therefore the findings are interpreted as of unrealistic and illusionary nature.

Furthermore, studies on unrealistic optimism comparing judgements of self with judgement of others in regards to positive events in the future, people usually assume that more positive things (e.g. experience a variety of pleasant events, like finding the perfect job, getting a good salary or having a gifted child) will happen to them in comparison to their peers (Weinstein, 1980).

Criticism for the theory of positive illusions comes from Colvin & Block (1994) who argue that the theory of positive illusions lacks significant empirical findings and consists of a shaky conceptual structure. They critically evaluated the findings in the paper of Taylor & Brown (1988) and came to the conclusion that although there seems nothing wrong with the acknowledgment that positive illusion exist, there is hardly any scientific evidence that positive illusions contribute to mental health and well-being, or in their own words: ‘close and critical inspection of these pertinent citations provided little support for the Taylor & Brown contention because of their many conceptual vagaries, methodological limitations, and empirical anomalies’ (p24).

Self-Enhancement as a Form of Positive Illusions 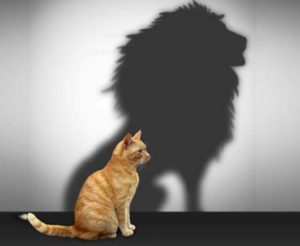 Taylor and Brown (1988) established that to be happy, or at least having the feeling of content is one of the main criteria for mental health and well-being. A continuously appearing statement seems to be that self-enhancement as a form of self-deception is not just a common factor of well being and mental health, but is also adaptive.

They argue that self-enhancing perception or high expectations of success is highly associated with working harder and longer on tasks. People with high self-esteem evaluate their performance more positively compared to people with low self-esteem and correlates as a positive feedback with enhanced self motivation, i.e. people who perceive their success as more positively as their peers are also more motivated to work harder in the future.

An overall assumption was made by Taylor & Brown (1988), which indicates that self-enhancement, exaggerated beliefs in control, and unrealistic optimism would be associated with higher motivation, greater persistence, more effective performance, and automatically with a higher success rate.

They found that realistic expectations about the downward course of people’s diseases were highly associated with faster course of the disease, helping to bring the reality these assumptions embody. But staying optimistic, even unrealistically optimistic helped to identify a meaningful life and the experiences showed physical and mental well-being, respectively.

Further studies have found that people who score high on self-enhancement also tend to be well-adjusted. It was established that if people believe that they are more talented than other people think its realistic they feel good about themselves and have a positive attitude towards stressful life circumstances (Campbell, Rudich, & Sedikides, 2002; Taylor, Lerner, Sherman Sage, & McDowell, 2003).

For example Robins & Beer (2001) found in their studies that illusionary beliefs about academic ability in students was related to narcissism, ego involvement, self-serving attributions, and positive affect and was also related to increasing disengagement from academic context.

Robins & Beer (2001) argue that it is time to acknowledge that the individual and the situation play a central role when evaluating the interdependent, independent and contextual variables. They emphasise the necessity not to differentiate between adaptive and maladaptive consequences, but rather to specify which particular illusion is related to which consequence (i.e. researcher need to establish in which circumstances which positive illusions are adaptive to which individual).

A longevity study (Wells & Iyengar, 2004) tried to establish that ‘decision makers’ whilst seeking full-time employment, resolve tensions by having positive illusions about their preferences and therefore sustain an internal and behavioural consistency, which in turn confer psychological benefit, They stated that:

‘contrary to the conventional glorification of self-awareness, our research into the motivational effects of preference inconsistency highlights instead the costs of accurate self-appraisal’ (p83).

Wells & Iyengar, (2004) suggest that these ‘decision makers’ use the illusion of internal preference as a protection against a realistically rather fluctuating self- awareness of expectations and negative feedback and as such experienced less negative affect in the process, greater outcome satisfaction, greater subjective well-being and attained more favourable outcomes (i.e. more job offers).

Connection to the Field of Positive Psychology

It could be argued that if positive illusions are adaptive rather than maladaptive and if self-enhancement contributes positively to well being and mental health it is necessary for the field of applied positive psychology to further investigate and establish how these functions contribute to a better understanding of well being and mental health in order to make normal life more fulfilling.

Over the last two decades research on positive illusions has shown that human thoughts are positively biased compared to what is realistically possible. Ellen Langer (1975) was one of the first scientific researchers to claim that people have the positive illusion to be able to influence situations by imaginary skill cues in random games of chance.

Matling & Stang (1978) discovered in their Pollyanna Principle that people evaluated themselves more positively than others; only clinically depressed people viewed themselves in a rather realistic or pessimistic way. Taylor & Brown (1988) theorised in their paper that positive illusions are necessary for mental health and that the conventional view of having a realistic approach to self, the world and the future might be, at least somewhat false.

However contradictory, both sides investigated in the subject of positive illusion even further and Robins & Beer (2001) argue that it is indeed time to acknowledge the existence of positive illusions as a fact and start looking at the findings in context.

More research has to be done to understand the implications of positive illusions to every day life and society and above all, to understand human existence.

Maslow A.H. (1950) Self –Actualizing People: A study of Psychological Health Personality Symposium No 1 11-34

Pualhus, D.L. ( 1998) Interpersonal and Intraspsychic Adaptivenesse of Trait self-enhancement: a mixed blessing? Journal of Personality and Social Psychology Vol 74(5), May 1998, 1197-1208